Econat's green composted soil improver for use in organic farming (ACV bio) and mixed composted soil improver (ACM) are both quality composts, certified by the Quality Mark of the Italian Consortium of Composters. ACV bio is obtained from raw materials of ligno-cellulosic origin, i.e., from residues from the maintenance of public and private ornamental gardens and green areas; ACM is produced from mowing and pruning, vegetable waste and waste from agro-industrial processing.

Caviro was one of the first companies to produce soil improvers: the first plant dates back to 1995 and was built to respond to the lack of organic substance in the soil, which was already beginning to emerge in those years.
In 2011, with the establishment of the company Enomondo, the composting sector underwent important developments, both in terms of diversification of the types of soil improvers and the quantities produced.

Today Enomondo can offer a range of products suitable for multiple uses and purposes.

The Mixed Composted Soil Conditioner (ACM) is obtained from the aerobic fermentation of shredded clippings and pruning cuttings, vegetable waste and by-products of the agri-food industry.

As of 2019, Enomondo ACM is permitted for use in organic farming.

Its use is particularly suitable for tree crops, such as kiwi fruit and orchards in general, because of its contribution of organic matter and nutrients (NPK). It is also highly suitable for horticultural crops and the creation and maintenance of lawns and green areas.

ACM has obtained the Quality Mark certified by the Consorzio Italiano Compostatori.

Green Composted Soil Improver is obtained exclusively from waste produced by the mowing and pruning of public green areas.

Enomondo ACV is suitable for use in organic farming.

ACM has obtained the Quality Mark certified by the Consorzio Italiano Compostatori.

Enomondo's research and development department began in 2017 to develop a new type of soil improver that would allow the recovery of digestates of exclusively agri-food and winegrowing origin from the CaviroExtra anaerobic digestion plant.

The experimental phase is now in its final stages, with the request to the Ministry of Agriculture for recognition of a new type of soil improver called Composted soil improver deriving from waste from the agri-food chain (ACFA).

This new type of product is obtained through the use of digestate, agri-food waste and a vegetable component made up of clippings and prunings from public parks and gardens.

Enomondo's soil improvers close the circle of the CAVIRO Group's Circular Economy, where everything starts from the fruits of the earth and everything goes back to the earth as nutrients.

Since 2020 we have been operating a plant that allows us to recover discarded carbon dioxide from the biomethane plant, purifying it to the highest level of standards for food use, then cooling it to a temperature of -30 °C, transforming it into a liquid and storing it in two tanks. 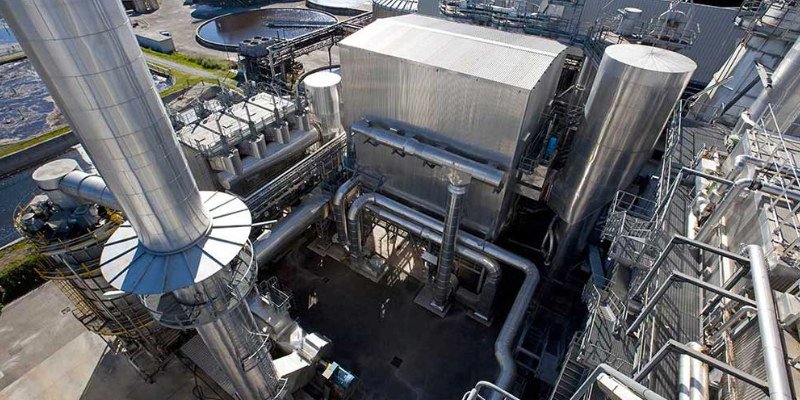 As a result of the joint efforts of Caviro Extra and Enomondo, a company in which Extra and HeraAmbiente each hold a 50% stake, most of the electricity produced at the Faenza site is obtained from a biomass cogeneration plant, capable of generating thermal energy at the same time.